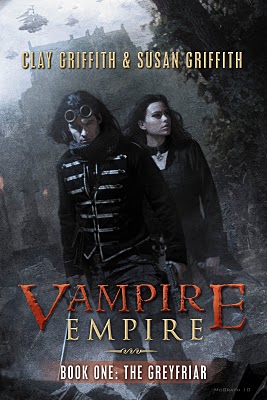 This is also a book I bought at the bookfestival, and I finished it only one day after I started reading. The book doesn’t have a lot of pages, only 301 so it didn’t cost me lots of time. The book is written by Clay and Susan Griffith and published in 2010. It is a book about vampires, just like the series title suggests, but it is very well written so it didn’t bother me.

The book has more than one point of view. I thought that was annoying sometimes, because in the beginning I had to read back a few times; I did not know who was who. But as the story unfolded it became much clearer and the different storylines made it an exciting read!

I find it hard to make a good summary of this book, because I’m afraid I’ll give away too much, so here is what is on the back of the book and on amazon:

” In the year 1870, a horrible plague of vampires swept over the northern regions of the world. Millions of humans were killed outright. Millions more died of disease and famine due to the havoc that followed. Within two years, once great cities were shrouded by the grey empire of the vampire clans. Human refugees fled south to the tropics because vampires could not tolerate the constant heat there. They brought technology and a feverish drive to reestablish their shattered societies of steam and iron amid the mosques of Alexandria, the torrid quietude of Panama, or the green temples of Malaya.

It is now 2020 and a bloody reckoning is coming.

Princess Adele is heir to the Empire of Equatoria, a remnant of the old tropical British Empire. She is quick with her wit as well as with a sword or gun. She is eager for an adventure before she settles into a life of duty and political marriage to man she does not know. But her quest turns black when she becomes the target of a merciless vampire clan. Her only protector is The Greyfriar, a mysterious hero who fights the vampires from deep within their territory. Their dangerous relationship plays out against an approaching war to the death between humankind and the vampire clans.

The Greyfriar: Vampire Empire is the first book in a trilogy of high adventure and alternate history. Combining rousing pulp action with steampunk style, The Greyfriar brings epic political themes to life within a story of heartbreaking romance, sacrifice, and heroism.”

I’m really going to buy the second book The Rift Walker. The only thing is I haven’t found a store yet that can order it for me here in Holland. But I’m sure I will find one soon enough!

One thought on “Vampire Empire Book one: The Greyfriar”