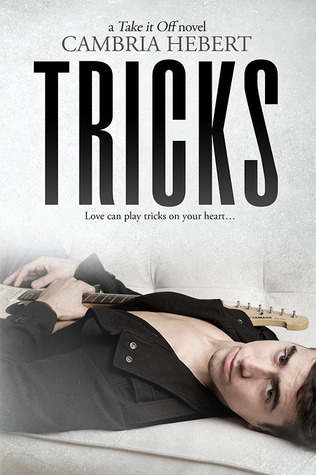 Tricks is the sixth installment in the Take it Off series by Cambria Hebert. This is a new adult contemporary series not intended for young adult readers.

Tucker has been a marine for years. But now he has decided to take on a new job at a private investigative firm. He is ready to go when his phone rings. A phone call that will change his plans.

They wanted me to go up there and pretend to be someone else, to look into the eyes of a woman who loved my brother and who was now going to be betrayed.

The FBI tells his twin brother just died, and the officials think of murder. Max was working on a case for them but died trying to solve it. They think the people Max was after killed him. Tucker is asked to step into his brother’s life and finish the case. Tucker want’s to get justice and agrees to do it. Soon he finds himself living his brother’s life. But that isn’t as easy as it seemed to be.

Charlotte thinks she has it all sorted out. She finished college, has enough work to do as a lawyer and found the man of her dreams. At least she thinks she has. When she finds out this ‘Max’ is behaving a little different from his normally up-tight self, she doesn’t know what to think at first. But she soon realizes she may even like this new Max better…

But it’s not all fun and romance in this story. Tucker is trying to solve the case Max was working on, and that involves tracking down dangerous criminals. People who think he is dead. People who want him dead. And Tucker isn’t the only one who is in danger…

This new Take it Off novel by Cambria Hebert was not what I expected it to be. I’m a big fan of Cambria’s work, I love the way she manages to bring stories to life. But Tricks didn’t do that for me. I don’t know why, but for me, it just didn’t work. That doesn’t mean it isn’t a good story. It has romance, suspense and action. And Max and Tucker do really sound hot. I think me not loving this story has something to do with me absolutely loving some of the other Take it Off novels prior to this one, But I will still be looking forward to the next installment in this series, Tattoo, coming in March.

Other books in this series: Torch, Tease, Tempt, Text, Tipsy