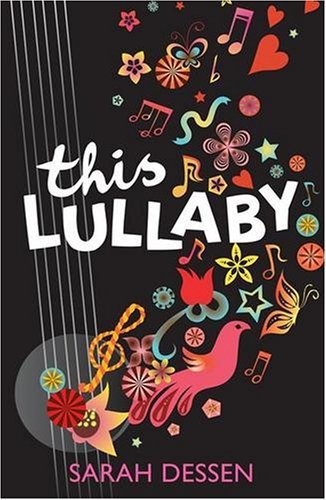 Today, a post about This Lullaby by Sarah Dessen. Another great Sarah Dessen book I really liked. I’ve had the book a few years now, and I’ve read it a few times. It is a very nice book to read, very easy but yet there is something more under the surface…

The story is about a girl, Remy, that has been trough so much in her life that she built a wall arround herself to protect her from being hurt again. Especially when it comes to love. During every summer holiday in the past few years, she’s had a boyfriend. But all those relationships ended as soon as the end of the holiday approached. Remy is a girl who want’s to organise everything, even her mothers weddings. Yes, weddings: her mother has been married several times and she arranges the whole wedding every time.  When there is a problem, Remy will fix it.

But that summer, she meets a boy who tells her they (as in he and Remy) are destined to be together. And that he really likes her. But she doesn’t believe him and goes on doing what she was doing, as if it hasn’t happened. One day, she sees the boy, his name is Dexter, again and in the weeks after that they encounter each other several times. Then Remy starts wondering whether or not the boy could be right; are they really destined to be? Could it be true? They start knowing each other and he becomes her boyfriend for this summer. But is he really her boyfriend for just the summer? Remy keeps telling herself that, but it isn’t that easy. And then, other problems make themselves known and it gets even harder for Remy. What will happen? Will they stay together? Or not? Only one way to find it out 🙂 Read the book!

This Lullaby is a very nice book to read for relaxation, but there is something more. Just like in all other Sarah Dessen books. Under the surface, there are serious issues being handled, it is not all fun and sunshine. It’s certainly a book worth reading. I’m looking forward to reading her newest book What happend to Goodbye soon.

April 24, 2012
Must Reads! Other Romance Romance YA Fiction 1 comment Rebecca
← The Pace in Germany! This Lullaby →

One thought on “This Lullaby”