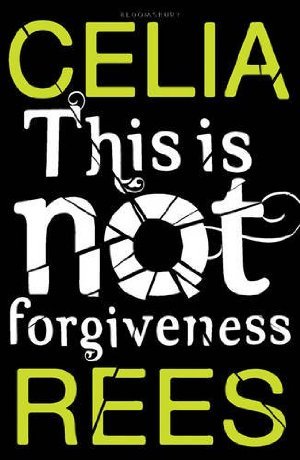 This is not forgiveness is a young adult psychological drama by Celia Rees. This book is not something I normally read. But when I saw it in the bookstore a few months ago and read the few lines on the back of the book I just had to buy it. And I have to say it was a book worth reading. I can’t say it was a nice story because it was not – there is a lot going on in this novel.

“This is not forgiveness. Don’t think that.”

Everyone says that Caro is bad …but Jamie can’t help himself. He thinks of her night and day and can’t believe that she wants to be his girlfriend. Gorgeous, impulsive and unconventional, she is totally different to all the other girls he knows. His sister, Martha, hates her. Jamie doesn’t know why, but there’s no way he’s going to take any notice of her warnings to stay away from Caro. But as Jamie falls deeper and deeper under her spell, he realises there is more to Caro – much more. There are the times when she disappears and doesn’t get in touch, the small scars on her wrists, her talk about revolutions and taking action, not to mention the rumours he hears about the other men in her life. And then always in the background there is Rob, Jamie’s older brother, back from Afghanistan and traumatised after having his leg smashed to bits there. Jamie wants to help him, but Rob seems to be living in a world of his own and is increasingly difficult to reach. With Caro, the summer should have been perfect …but that isn’t how things work out in real life, and Jamie is going to find out the hard way.            – goodreads.com

His face is as familiar as my own in the mirror, but he looks ike someone I no longer know. ~Jamie

First couple of pages it was a bit hard to get into the story. But after a few chapters I got a clearer picture of who was who and what was going on. I really liked the dialogues in this story. It’s very realistic. I like the writing style in general, how the thoughts, what characters say and do are incorporated. I also like how sincere the characters feel. I noticed myself hoping everything would turn out alright, that everything would be ok. The three points of view were really different from each other. Not just in font, but they really were different voices.

You get enough information to keep you wondering, not so little that you are getting annoyed and not so much that you can predict what is happening. It was just enough. It’s unlike anything I’ve read before. Normally,  I can really like a character or I don’t. I found it very hard to do so in this story. I really did not like Rob. My dislike only grew throughout the story. And Caro, she seemed ok in the beginning but as the story continued she wasn’t that great either. And then there was Jamie. He was the ‘normal’ guy. Caught up in the middle I guess.

Because this book is so different, I find it very hard to put a rating on it. It’s a good read, but for me it wasn’t a page-turner nor was I bored. It was a very realistic story and the writing style was great. So because of that I will go with:

PS Curious about this book? You can find the official trailer here.