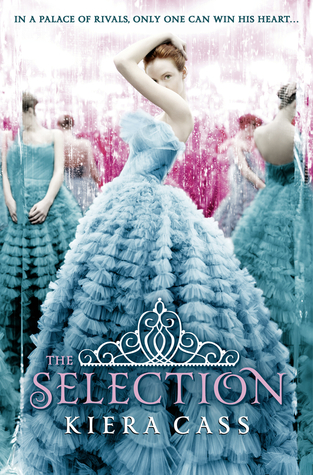 I’m back! And not with just some book to tell you about. The Selection is a novel by Kiera Cass. I wasn’t familiar to her work before I read The Selection, but I’m happy I discovered her work!

The Selection is a The Hunger games meets The Chemical Garden story. It is a story about a girl named America Singer. She lives with her family in Illéa in the United States in the future. (At least, I think it’s in the US because there still is Carolina in the story 😛 ). She is a Five. That means that she and her family are not rich, but not poor either. I think you can imagine where she’s at when I tell you Seven is the worst and One is the best (the Elite). She has a boyfriend named Aspen, but she hasn’t told anyone about their relationship because Aspen is a Six (lower than she is). But she discovers he is planning to ask her to marry him.

It is tradition in Illéa that the heir to the throne marries a ‘normal’ girl, a girl from the nation. From each province a girl will be selected to compete for the princes heart. Girls can fill out a form to enter in the drawing, but America doesn’t want to enter at first. She feels no need to enter, not wanting to be a One. And, she thinks Prince Maxon is a stuck-up, narrow-minded guy. Her mother want’s her to try to be picked so she can help her family get a better life. With that in her mind America asks Aspen’s opinion, and he to want’s her to take part because he want’s the best for her. They have a fight about what she has to do and kind of break up. America enters with the thought that the chance she’ll be picked is very very small. And yes, as you can predict she gets selected. And she is not to happy about it.

She makes a funny first impression on Prince Maxon you’ll have to read to get the full impact; it’s so funny! And after that there are more meetings with the Prince, so LOL you can’t imagine. Then America finds out Maxon isn’t as bad as she imagined, and she asks him to let her stay as a friend so she can tell him all about the other thirty-four girls in the palace. Nothings better than having someone on the inside right? Maxon agrees and they become friends, and at some point Maxon want’s to be more than friends. America doesn’t know what she want’s, because there still is Aspen. And when Aspen arrives at the palace as a security detail, she really doesn’t know what she wants.

A fun love story I was happy to have read that ends with the dramatic End of Book one line. I think I’ll buy the next novel in this series too, but I’ll have to wait… the next book is titled The Elite and comes out April 2013.

2 thoughts on “The Selection by Kiera Cass”