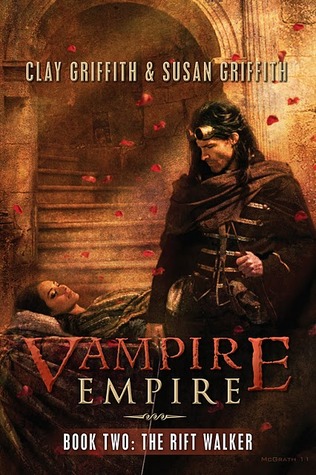 The sequel to The Greyfriar, The Rift Walker, finally arrived on my doorstep last week. I started reading it as soon as I could, and I was not disappointed. It was what I hoped it would be.  And I have to thank Clay and Susan Griffith, the authors, for another great book. And if you’re reading this: thanks for the comment on my The Greyfriar blog you posted  on Facebook!

The story continues where The Greyfriar ended. Here is the Amazon description:

“Princess Adele struggles with a life of marriage and obligation as her Equatorian Empire and their American Republic allies stand on the brink of war against the vampire clans of the north. However, the alliance’s horrific strategy for total victory drives Adele to abandon her duty and embark on a desperate quest to keep her nation from staining its hands with genocide. Reunited with her great love, the mysterious adventurer known to the world as the Greyfriar, Adele is pursued by her own people as well as her vengeful husband, senator Clark. With the human alliance in disarrray, Prince Cesare, lord of the British vampire clan, seizes the initiative and strikes at the very heart of Equatoria.

As Adele labors to bring order to her world, she learns more about the strange powers she exhibited in the north. Her teacher, Mamoru, leads a secret cabal of geomancers who believe Adele is the one who can touch the vast power of the Earth that surges through ley lines and wells up at the rifts where the lines meet. These energies are the key to defeating the enemy of mankind, and if Princess Adele could ever bring this power under her command, she could be death to vampires. But such a victory will also cost the life of Adele’s beloved Greyfriar.

The Rift Walkeris the second book in a trilogy of high adventure and alternative history. Combining rousing pulp action with steampunk style, the Vampire Empire series brings epic politcal themes to life within a story of heartbreaking romance, sacrifice, and heroism.”

It was an amazing book to read, and the descriptions of the decor were great as well.  Let’s just say I was glad to see Adele and Gareth (The Greyfriar) together again. I’m sorry this post is so short, but I have little time… I hope to post about another book soon. The second book in The Trylle series is on the way, so that is certainly one I will post about. Again, thanks for reading! Almost 500 views! Wow! 😀 😀 😀 Thanks so much! I would like to hear from you, so feel free to leave a comment.