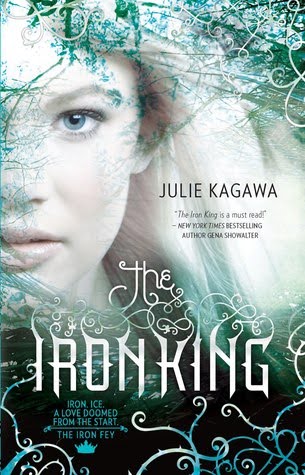 The Iron King is the first novel in The Iron Fey series by Julie Kagawa. I picked it up in a bookstore where it was recommended because it is ‘the thrilling new Young Adult sensation’. And I didn’t want to miss this ‘sensation’ so I bought it. But it wasn’t the sensation I was hoping for. I liked it, but didn’t love it. A very nice concept, but this authors writing style didn’t move me that much. It was just another book for me, nothing special. But I’m glad I read it though because it is sort of an original story. But everyone has his (or her) own taste in books, it would be weird if everyone loved the same books right?

In this story the whole A midsummer’s night dream sort of comes to life. But it also doesn’t. I know, that doesn’t make any sense, does it? 😆 See, the characters are there but the world is different. And then there is a girl named Meghan Chase. She is half faerie and half human, but until the day Puck explains she doesn’t know this. As it turns out she lives among faerie and other creatures. Her little brother is kidnapped by a bad-guy ruler and Meghan goes to the rescue. Then there is a whole action/mystery/fantasy/a bit of romance story up to the rescue of the little boy.

This is a Goodreads summary:

Meghan Chase has a secret destiny; one she could never have imagined.
Something has always felt slightly off in Meghan’s life, ever since her father disappeared before her eyes when she was six. She has never quite fit in at school or at home.
When a dark stranger begins watching her from afar, and her prankster best friend becomes strangely protective of her, Meghan senses that everything she’s known is about to change.
But she could never have guessed the truth – that she is the daughter of a mythical faery king and is a pawn in a deadly war. Now Meghan will learn just how far she’ll go to save someone she cares about, to stop a mysterious evil no faery creature dare face; and to find love with a young prince who might rather see her dead than let her touch his icy heart – Goodreads.com

I think you love this novel, or you don’t. This series has a specific public, and when you’re not that public you won’t really like it. It was a nice story to have read, but I’m not extremely looking forward to reading the other novels in the series – but that doesn’t mean I wouldn’t like te read them one day.

You just have to be into this kind of stories. When you are, you’ll love this book. When you aren’t, you won’t.