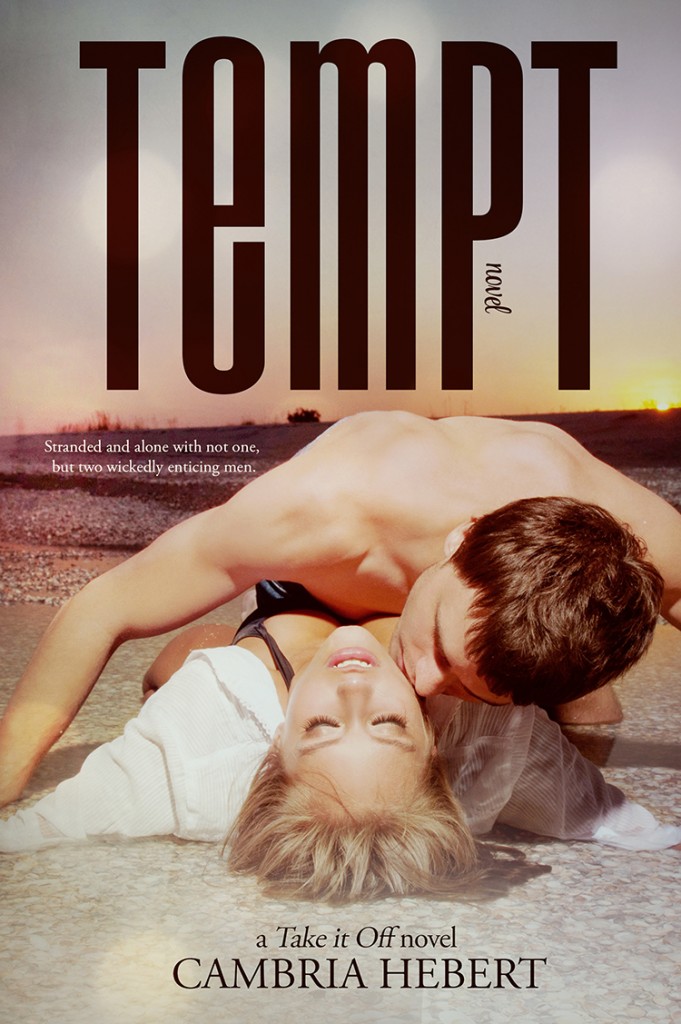 Tempt is the thirth installment to the Take if Off series by Cambria Hebert. This is a New Adult contemporary series, intended for ages 18 and up.

The story is about Ava Malone, a woman who’s had a though time behind her. On top of that, her grandmother just passed away. Her grandmother’s wish was to have her ashes scattered over the ocean by Porto Rico, because she met the love of her life, Ava’s grandfather, there. And as her grandmothers favourite Ava is the one who has to do it: fly to Porto Rico and make sure her last wishes are granted.

A private plane? To fetch me?
“You must have the wrong person,” I said, holding up my ID again. “You should check
again. I should just have a ticket here. For one of the commercial flights.”
“You’re Ava Malone, correct?”
I glanced at my ID just to be sure. That’s what it said, right there beside my horribly
embarrassing photo. “Appears that’s me,” I muttered.

When she is at the Miami airport, Ava’s perception of things that are going to happen changes. She thought she booked a commercial flight, but soon she finds out she’s going to fly to Porto Rico on a private plane. And the pilot, Nash, sure is a man who isn’t ugly… He is the grandson of Ava’s grandmothers best friend and there to pick her up as a favor to his grandmother.

Soon they take off, and they’re on their way to their sunny destination. But then the plane crashes, and they find themselves on a deserted island. They start a relationship, but then they found out they’re not all alone on the island… There’s another man there… Duke.

As I was pulled upright, I turned, wondering how in the world
Nash found me so fast.
It wasn’t Nash.
It was another man.
The arm at my waist tightened when I looked into his dark eyes.
I screamed.

The story has the humor I love in Cambria’s writing. The characters are people I think I would get along with just fine.. But the story didn’t grab me like the first one, Torch, in this stand alone series. I missed the layer underneath the love story. I don’t know why, because this is a great story. I think I’ll appreciate it even more after I’ve read it again. That is something I’ll sure do – read it again.

October 14, 2013
BookReview Fiction 1 comment Rebecca
← Fields of Elysium The Summer I Found You →

One thought on “Tempt”