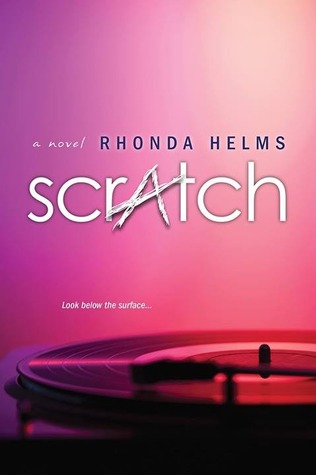 Scratch is a new adult contemporary romance story by Rhonda Helms. This is the first book I’ve read by this author and it made me curious for her other stories, although it did not keep me up at night wondering what would happen next.

Despite my intense fears, despite everything that locked me into this paralyzing mind set that I’d never be fully healed from my past, I still held a smidgen of hope that I’d find that kind of love too. That someday I could shed this pain and be whole again.

21-year-old Casey is a senior business finance student who also is a part-time DJ at The Mask, an up-and-coming dance club near campus. She’s been working at the club for a couple of months, entertaining the crowd with the music blasting from her speakers. One night, a guy buys her a drink. Something that doesn’t really happen to her often. The beer comes from Daniel, a guy from her philosophy class. He is really good-looking and the target of a lot of girls in ‘man hunting mode’ on campus.

Casey and Daniel start bumping into each other more often. One night, he rescues Casey from a college party her roommate dragged her to. Casey soon discovers she can really open up to Daniel, talk to him about more things than she normally feels comfortable with. What Daniel doesn’t know, is that Casey is being haunted by her past. Every night she dreams about her family dying, but she keeps all those feelings locked inside during the daytime. But she feels those secrets are stopping her from being with Daniel. She isn’t sure she is ready to fully open up to him, to their relationship. Can they be together even after all Casey has been through?

The attention made me itchy underneath my skin. I suddenly didn’t want this guy to walk beside me, to nudge me gently into opening up in that manner of his. My life was my own, private, and it was better that way.

Scratch is a nice story, from page one the descriptions were so vivid I could see Casey DJing in the club, entertaining the crowd. But I have to say, I lost that vibe further into the story. I discovered what really happened to Casey when the story was nearing its end. I feel some details could have been revealed sooner. And I do understand it is an emotional rollercoaster for Casey, but I did not really feel it the whole time. If the author would have managed to keep me feeling those emotions through the whole story, I would have definitely given a higher rating. But for some reason I did not feel it the whole way through. But I am curious for other books by this author. It is a good story and it does feel realistic, so for that I give it: