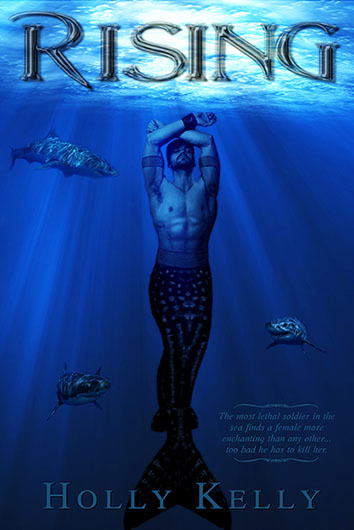 Rising (Rising #1) is a young adult paranormal romance story by Holly Kelly. It is a story about mermaids – something I don’t usually like – but the author has made it into an interesting story.

Sara flailed and gulped in seawater. The glow from the surface faded to black as the sea enveloped her. It couldn’t be. She’s escaped this nightmare years ago. But here she was, and here she would die, at the bottom of the ocean.

Sara is a twenty year old who hasn’t been living life to its fullest. Life in a wheelchair isn’t easy and she has been through a lot. Even though she isn’t going out as much as she’d like to, she’s not going to sit back and be pitied. That is, as long as no one will see her deformed legs.

Xanthus is Dagonian, kind of like a  merman but more egoistic and not so nice. He is on a quest to make life better for humans and Dagonians. Xanthus is granted permission to walk on the land of the humans, trying to stop the humans from polluting his home, the ocean – and therefore saving humans from Dagonians killing them. He is to send the responsible humans to the king of the ocean to answer for their mistakes.

And then he meets Sara. He knows immediately she is not human. She is half Dagonian and has the tail to prove it. He should kill her, but he can’t. He struggles to come to his senses, to complete his quest and stop the war. But he falls hard for Sara: his life will never be the same. Nor will Sara’s life as she finds the thing she feared most is the thing that makes her feel at home.

Xanthus felt tormented, guilty. He’d known that she wasn’t safe among the humans. But he’d left her anyway, to complete his mission. (…) Regardless of his duty, Xanthus should never have left Sara.

I never really liked books about mermaids. But I have to say I did like this one. It is different and has the action, romance and plot twists and turns I seek in a good story. I think it could use better editing. There were a few things that were repeated a few times and the author could have come up with some synonymous for some words. And the cover art… I have to say I don’t like it.  But it was an ok story. So therefore: