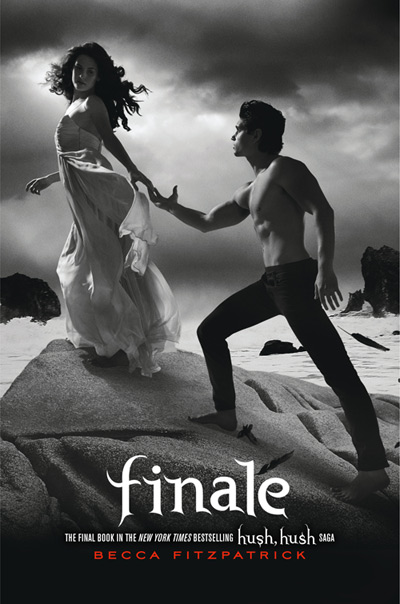 Finale is the long-awaited conclusion to the Hush Hush saga by Becca Fitzpatrick. I’ve read all the books in the series more than once, and was looking forward to this one, even though it is kind of sad that it is the last we’ll hear from Nora and Patch…

Fun is, a friend of mine is reading this saga in Dutch, so she is still waiting for Silence to be translated. And I already finished the whole series. You know, it is kind of hard to not tell her what happens. But she has to wait – or grab the English books.

The book continues the Nora and Patch story, with a now immortal Nephilim Nora who swore to lead the Nephilim army. Lucky for

her, her oath really was that specific. Hank (her biological father and the person she swore the oath to) meant for her to lead the army to war against the Fallen Angels, but Nora is planning on leading them to peace. She swore nothing more than leading the army, so that shouldn’t be a real problem, if you leave the not-agreeing Nephilim out. And, the higher-up Nephilim are not really happy she has a relationship with a Fallen Angel (Patch). But Nora assures them she ans Patch broke up (but that really is not the case) and they can trust her. The problem is, the higher-up Nephilim don’t trust Nora.

One night, Dante shows up and tells Nora she has to try to get the higher Nephilim on her side and convince them she can lead the army. His idea is to pretend he is her boyfriend, so the rumours about her and Patch being together will be out of the world. And, Dante has the trust of the higher Nephilim – Nora will only benefit from that in winning their trust as well. He also offers to train Nora to develop her Nephilim abilities. She will need them if it comes to a fight. Patch is not really happy with the idea – he still is Nora’s boyfriend, but they keep it secret – but agrees to it while it is in Nora’s best interest.

Dante starts training Nora, but it is hard for her. Being born as a human, she doesn’t have the Nephilim body. Nora gives it her best shot but only accomplishes small improvements in her abilities. One day, Date forces her to drink something and later on Nora finds out it was Devilscraft: an illegal addictive drug that improves her speed and abilities a lot. When Nora finds out it is Devilscraft, she refuses to use it anymore.
Later on, something happens and Nora is addicted to Devilscraft. She keeps it secret. And then there is the other strange stuff going on in her life. Why has Marcie moved in with her and her mom? What’s up with the guy who want’s to chain Patch in hell? And then there is this thing with Vee…

Finale is a great conclusion to the Hush Hush saga. It has so many unexpected events, it had me hooked right away. If I had to give it stars, I’d give it 4 out of 5. I really liked the story, but I didn’t get the ‘vibe’ I had while reading the other Becca Fitzpatrick books. And, I have to say I don’t love the cover. So, I’d give it a thumb and a half up, but since I can’t do that, I’ll give it one thumb up.