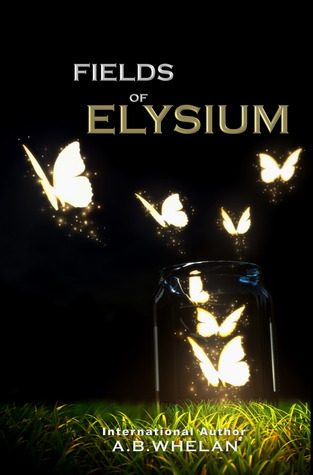 Fields of Elysium is a great Young Adult  story by A.B. Whelan that brings an astonishing world to life.

The story follows Molly, a sixteen year old girl who lives in Los Angels. She  moved there with her parents after her father was scared out of the small town they lived in before by a scary kidnapping of a young girl. Since then, he’s been over protective of Molly.
Starting at a new school isn’t easy, Molly is trying to be the plain girl she’s always been. She makes some friends and soon her life is back to how it was before in her former hometown, Hopewell.

“Me? Nothing’s really ever happened to me. My stories won’t last much longer than an hour.”

But that easy life is over when Molly goes out on a hike with her dog Pandora (a really cool dog name if you ask me 🙂 ) and discovers a portal. Before she knows it she is sucked into it and ends up in another world:  Arkana. A place best described as fields of Elysium, the hereafter; a beautiful place. The descriptions the author used to describe this place? Just wow .I want to find a portal and dive into it . She really managed to bring this world to life.
In Arkana Molly meets Justin and his friends who are celebrating his seventeenth birthday by a boys day out: swimming, hunting, partying. They ask Molly to join them and she does. She has a great time with them, finally feeling as  she really belongs somewhere. That day, is also the first time she lays eyes upon Vincent, Justin’s friend. Justin expresses his interest in her but every time she thinks of him her mind drifts off to Vincent, the quiet boy who doesn’t seem to like her very much.

This place was surely te Fields of Elysium, the heavens, Paradise. And I was with my hero.

Molly discovers this new world is not for people from earth: Earthlings are not very welcome in Arkana. As far as the Arkanians know, Earth isn’t a very nice place to be. They only know the bad stuff about the planet: war, violence, murder: all the horrible stuff. And Vincent isn’t one of the people who takes on that stuff lightly, while the others are easier to convince of Molly’s not a bad person. But Vincent isn’t an easy person to convince.
When Molly returns to earth she can’t stop the compulsion the newly discovered world has on her. It isn’t the smartest thing to do, to go back. There’re people there who want to kill her, just because she is from Earth… But Molly can’t stop thinking about Arkana. And before she knows it she goes back to spend more time in this really cool world.

I should have listened to him but my stubbornness brought me here and endangered both of us.

For me, the story was a bit slow at first. Not annoyingly slow because I get why the author did what she did: she had to write a few chapters for the reader to understand the world Molly lives in on Earth. Without those chapters of her life, I wouldn’t fully grasp the awesome world of Arkana. As I said, the descriptions the author wrote are really vivid. I feel like I’ve been in Arkana, saw the beautiful flowers and tasted the clean air. And I have to mention the cover of this book, even though you shouldn’t judge a book by its cover 😉 But I really think it’s stunning! I’d sure pick it up if I saw it in a bookstore. (I only have an ebook copy). I’d sure like to read the next book in this series, Valley of Darkness.