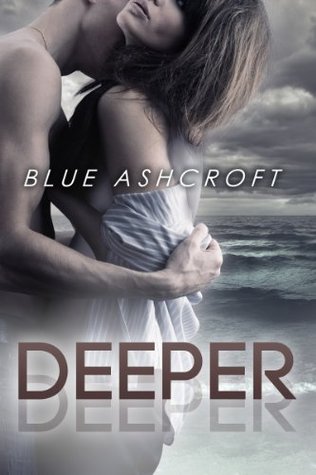 Deeper is a New Adult romance story by Blue Ashcroft. Wow. What a great story this is. If you’d ask me, this is a story you wouldn’t want to miss on your reading list this summer.

Lifeguarding has never been so hot. Or so awkward.

The story is about nineteen year old Rain. She’s been through a tough year. Her boyfriend died in a water park accident, and she still blames herself for it. After that happened, she promised herself she would keep everyone safe. Wanting to continue working as a lifeguard, Rain starts working in a new water park. She gets a job as supervisor: the one to make sure the other guards are safe and doing their work.   Rain also promised she would never fall in love again.

He places his hands on the edge of the pool and pulls himself up out of the water with one smooth motion. All glistening muscle with water falling off of him. I want to hit my head on the side of the pool so I can stop thinking this way. – Rain

But on the first night, even before the actual work begins, Rain finds out this is not an easy promise to keep. There is this really hot tatted guy she makes out with, and she ensures herself it is a mistake. She won’t slip up again. But the next day Rain finds out she isn’t the only supervisor. The other one is Knight. The guy she made out with the night before. He it clear from the start that he doesn’t really like Rain being a supervisor, he thinks she is too young. But they have to work together, so they do. But Knight is really hot. All sixpack tatted hotness. That doesn’t make Rain’s job easier. She can’t  deny there is something between them, but she doesn’t want to give in. She can’t: she made herself a promise.

I don’t know how anyone can be so beautiful and so irritating and so capable, but she is, and she ties me up in knots. I decide right in that moment. I’m going to watch out for her whether she likes it or not. – Knight

Knight isn’t happy about the beautiful girl being a supervisor. Even when she is very good at her job. He feels very protective of her. He never thought he’d love someone again, not after what happened before. But he can’t get Rain out of his thoughts. He can’t help falling for her.

This story really got through to me, it made me  think about it even after I finished reading. But at some points in the story I felt is was going too fast. But may have had something to do with me absolutely loving it. Sometimes I felt like the author could have spend a couple of more pages on something because sometimes it was like ‘ end of chapter’  and the next chapter went on a few days or weeks later. I didn’t like that while I was curious about how the characters would have handled certain things. But it is a great book. The author drags – no, hauls – you into the story. Two beautifully written characters with a backpack of emotional baggage. They find each other and start to believe in their future again. It is so real. So very real. And touching. Unbelievably beautiful. It has it all. The romance, the suspense, the emotional part, te mystery. What’s not to love?