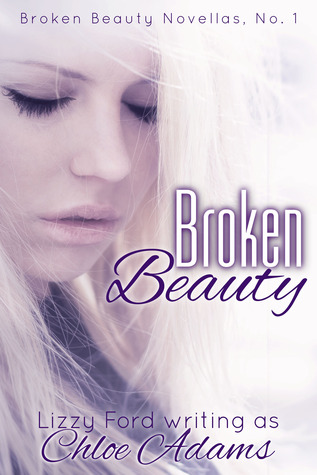 Broken beauty is the first volume in the Broken Beauty series by Chloe Adams, ‘nom de plum’ for Lizzy Ford. This story is not intended for teens under 18. It is not an easy story to read, that is what Lizzy said about this novel: it’s not an easy story to read but it’s something that had to be told. I totally agree with her on that.
The story is about 17 year old Mia,  girl who wakes up in a garden the morning after a party. She doesn’t recall what happened, but has been raped. Mia’s father is a politician, known for his opinions on the morning after pill and abortion. He also isn’t someone who really seems to care about her. He isn’t here when she is in the hospital, bruised and beaten. He only seems to care bout how he can use this to gain more votes. The only one’s the girl feels like they are there for them, are the two cops who found her that night in the garden. But Mia knows who raped her. It was the son of a wealthy politician. And that wealthy politician is her fathers only political ally. So accusing him, could cost her father his political career. Mia is torn. She want’s justice, but she doesn’t want to ruin her father’s carreer…
They did this to me. The bruises will heal, but I’ll never be able to forget what happened.
As if that isn’t hard enough, she discovers what her father told her isn’t true : she has always been told woman who are raped don’t get pregnant. But then she finds out she is…
It’s not an easy story to read and I had a hard time reading it in one go. It’s kind of fragmented at times, and some moments I felt like: ‘this could have been left out’. And I found it annoying that the dad was called ‘daddy’ all the time. Not once dad or father. But as Lizzy said: it is a story that had to be told. Even though it isn’t an easy story to read. But I want to know what will happen to Mia next, so I’s like  to read the next installment in the series
For those who read “No Way Back” ( release in Oct 2012) , “Broken Beauty” and “Broken World” are the two novellas that made up the original “No Way Back.”
2.5 out of 5 stars.