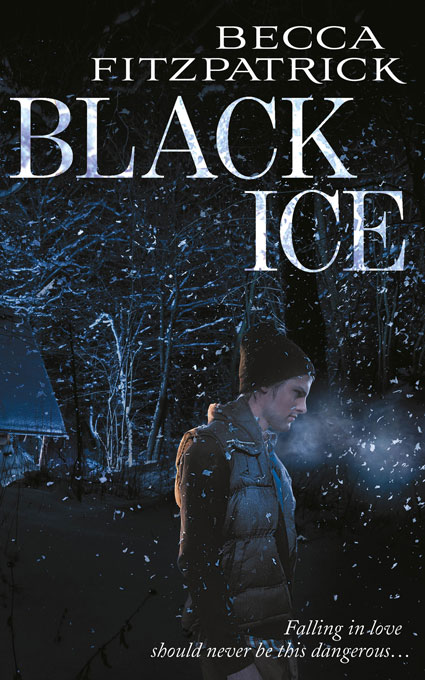 Black ice is completely different from the other work I’ve read by Becca Fitzpatrick. I’m familiar with the Hush Hush saga, which is YA paranormal. Black ice is not fantasy, nor paranormal. It is a suspense filled thriller.

If I had known things would turn out this way, I would have trained harder. I would have learned to take care of myself. But I guess that’s the point, isn’t it? You never know what you’re going to have to face, so you’d better be prepared.

Brit Pheiffer has trained to backpack the Teton Range, but she isn’t prepared when her ex-boyfriend, who still haunts her every thought, wants to join her. Before Britt can explore her feelings for Calvin, an unexpected blizzard forces her to seek shelter in a remote cabin, accepting the hospitality of its two very handsome occupants;but these men are fugitives, and they take her hostage.

Britt is forced to guide the men off the mountain, and knows she must stay alive long enough for Calvin to find her. The task is made even more complicated when Britt finds chilling evidence of a series of murders that have taken place there and in uncovering this, she may become the killer’s next target.    – goodreads.com

They never tell you that when you watch someone you once loved dying, hovering between this life and the next, it’s twice as painful, because you’re reliving two lives that traveled one road together.

But nothing is as it seems, and everyone is keeping secrets, including Mason, one of her kidnappers. His kindness is confusing Britt. Is he an enemy? Or an ally?
What follows is a thrilling story filled with plot twists and turns that had me on the edge of my seat the whole time. The descriptions in the book were vivid enough to let the story play in my head like a movie.  But, I did not really like the main character. Especially in the beginning of the book, I did not like her attitude. I can’t really explain why. She was just there. Nothing more, nothing less.  And I like a little romance in a story, but I’m not sure about this one. Stockholm Syndrome. Britt falls for her capture, who is threatening her life. All while pondering about her ex-boyfriend who she is sure will save her. All in all, I found this a really hard review to write. Liked the story, but the main character, not so much.