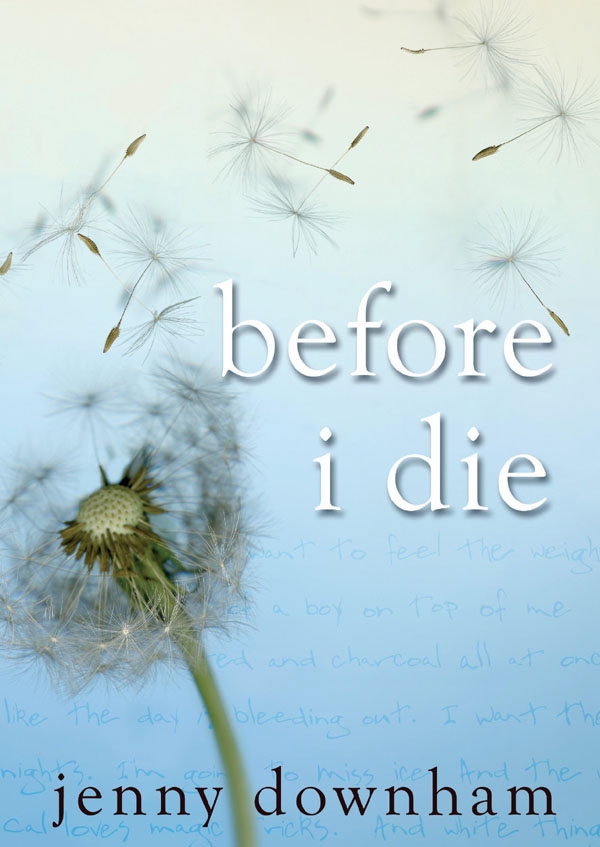 This time, a book I’ve had on the shelve for a few years, and I’ve read multiple times… Before I die by Jenny Downham. An amazing novel I cannot get rid of. (as in having to sell a few books every now and then to make some room for new books on my bookshelves, and not being able to sell this one because it is one of the books I treasure)

“It’s really going to happen. I really won’t ever go back to school. Not ever. I’ll never be famous or leave anything worthwhile behind. I’ll never go to college or have a job. I won’t see my brother grow up. I won’t travel, never earn money, never drive, never fall in love or leave home or get my own house. It’s really, really true. A thought stabs up, growing from my toes and ripping through me, until it stifles everything else and becomes the only thing I’m thinking. It fills me up like a silent scream.”    ―      Jenny Downham,        Before I Die

The story is about a sixteen-year-old girl named Tessa and she has been fighting leukemia for four years. Her father has never given up on her recovery but she gets sicker every day. And then the day comes, when the doctors have to give her up. They cannot help her anymore. And that is when Tessa decides she want’s to do some stuff before she dies. She writes those things on the wallpaper in her room, and soon enough she  has a whole list. She want’s to drive a car, have sex, use drugs and lots of other stuff.

Her parents, who are divorced but get back together when Tessa becomes very ill, support her in doing all the stuff she want’s to do before she dies, but they are not the only one’s supporting her. There’s also her little brother Cal. And her best friend Zoey. And then there is Adam, the boy next door. He and Tessa become friends, and later on even more: he becomes the love of her life.

Before I die is a story about a dying girl, but it is so much more. It is about love, hope and having a great time, even if you know you’re going to die. The way the story is written is almost poetry. It is a book you can’t put down, and when you have finished it you are going to start reading again. It is such a special book: it makes you laugh, but the next page makes you want to cry. I think everyone should read this book, and trust me, if you have you’ll be glad you did.

One thought on “Before I die”