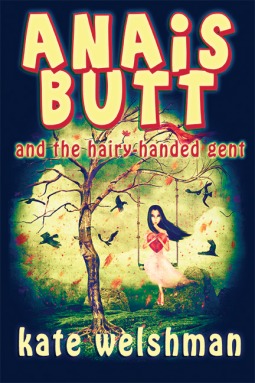 Anais Butt and the Hairy-Handed Gent is a Young Adult novel by Kate Welshman. The book’s release date is three days from now (November 21th), but today is the first day of the book’s blog tour. And as you can guess, today is the day the blog tour stops at GotToReadThoseBooks!

“I’d been nursing the idea that I was something of a wild thing amidst old furniture, a free spirit oppressed by unfortunates less intelligent and lively than myself. I was underestimated, misunderstood, unappreciated. The problem, I thought, lay with the pretty, mediocre folk arround me.” – Anais Butt

The story is about seventeen year old Anais ( pronounced An-ay) Butt who has just been expelled from the fifth boarding school in five years. When she visits her Nanny Bette and tells her all about what she did to get expelled,  Anais finds out her grandmother has a guest. This guest’s name is Shannon, and he is a tad bit weird according to Anais. He sleeps during the day, his room smells like a dog is living there and he makes a mess. Anais curiosity gets the best of her and soon she finds herself drawn to this weird but handsome man.

But she doesn’t have much time to get to know him because her parents have decided to bring her to her Nanny Pam in a small mountain village, to help her and her cousin Josephine with the work on their riding school. This should teach her some manners, according to Anais parents. But Anais sure doesn’t want to go to live with Nanny Pam, who is known in through family as the children hating , once a week bathing person with two faces: kind to her costumers, a which to the people her family. But she has no other choice than to go work for her…

“There’s no easy way to break this to a person,” said Shannon, gulping. “I’m a werewolf.”

Soon after Anais working at the riding school she discovers Shannon has followed her. Every night they meet, and soon he tells Anais he is a werwolf. And that is when it gets hard for Anais. Not because she doesn’t know how to cope with this news, but because people nearby are killed and arrows seem to point in Shannon’s direction…

This is a really well written YA novel. It made my smile , has suspense and a tinge of romance. Kate Welshman has managed to bring the characters to life without describing them from head to toe. She just chose the exact words you need to form a great picture. And I also loved how there wasn’t much of a hustle and bustle when Shannon told Anais he was a werewolf. It was all out there, no page after page of clues and explanations. It just is what it is, and I found that nice for a change. I think the power of this story lies in its simplicity. Sometimes less really is more.

But I have to say I didn’t like the ending of the story. I felt I was missing something. For me ~spoiler alert ~ the ending would be better if it ended when  Anais saw Shannon again instead of with a phone call. Overall, a story worth reading, and book recommendation for the holidays.

Here is another memorable quote I had to share with you

November 18, 2013
BookReview Other Paranormal Romance Romance YA Fiction No comments Rebecca
← Crash into You The Power To See →