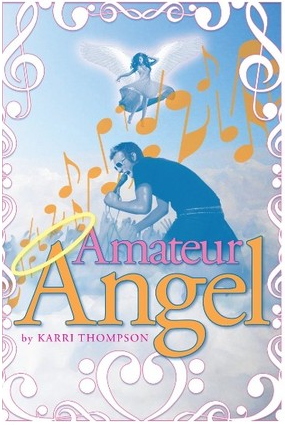 Amateur Angel is a Young Adult paranormal story by Karri Thompson. I received the book in return for a review.

The story is Ashley, a girl who died on her eighteenth birthday in a car accident. She sure wasn’t ready to die, but she did. She ends up in the here after, but enters the wrong line… With that, she isn’t send to her welcoming in the hereafter, but sent back to earth as a guardian angel. But she’s missed all the training the others have had, she’s confused and doesn’t know what is expected from her.

Here I was, Brett Ashley Baker, A.K.A., dead girl, A.K.A., untrained guardian angel, stuck figuring out all of this angel stuff in addition to being dead on my own.

And Ashley is even more confused when she finds out her assignment is her idol:  rock star Cannon Michaels. Ashley has posters of him all over het bedroom walls, or should I say she had since she died. She finds out being a guardian angel is hard work, even if it is boring at times. But she makes some guardian angel friends, so she doesn’t feel all alone. And her friends teach her about being a G.A, and tell her how she can (and can’t!) use her powers. But that isn’t easy… The not using the powers is harder for her than using them, because she hasn’t been trained. She also finds herself falling in love with her assignment, something that is forbidden. And then one day, Cannon sees her…

It couldn’t be, but it was. Cannon Michaels, the lead singer of the band Sendher and the hottest guy on this planet, was sitting less than five fee
t away from me completely naked with the exception of a thick, white towel draped across his lap. I should be freaking out at this point, but I wasn’t.

Amateur Angel is a nice young adult paranormal story by a promising author. I liked reading something in a different writing style than I usually read, but on the other hand I’m not sure I loved the whole POV thing. In this story, you read from Ashley’s POv but at the same time it’s like you’re reading from a thirth person’s POV.  But the story has humor in it, and that is something I love.  I’d love to read more storys by this author to find out whether or not I love this kind of 3th person writing  🙂