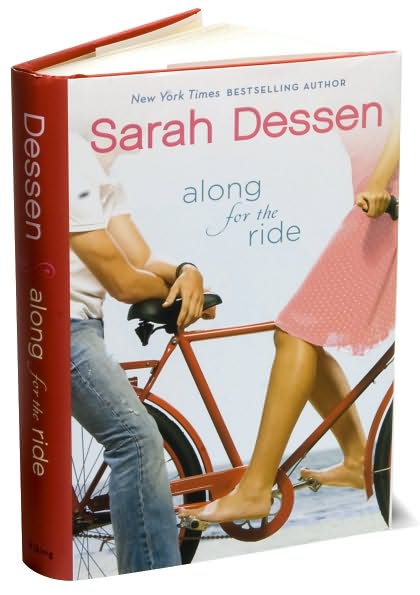 I went to a bookfestival yesterday, and bought ten new books. One of them is Along for the ride by Sarah Dessen. I already knew Sarah Dessen from Just Listen, This Lullaby, This Summer and Lock&Key. So when I saw Along for the Ride lying in a stash of books, I had to buy it. And I already finished reading it this morning. Yes, it was that good.

Along for the Ride is about a girl named Auden. Her parents divorced when she was younger, and she has always blamed herself. She lives with her mother, who is a professor and a bit strange. Auden never had a real childhood because she was always reading books and by herself. Her father was a writer. But years later, people are still waiting for his second novel.

Auden decides to spend the summer at her fathers. He re-married with Heidi – a beautiful much younger woman – and they just had their first baby: Thisbe. Not long after Auden arrives, she notices Heidi isn’t doing well: she is handling the baby all by herself and her father is not lending a hand at all. Auden recognizes this: it is the same that her father did when it came to raising her and her brother Hollis.

Auden doesn’t sleep at night. It started when she was little and did not sleep because she overheard her mother and father fighting, and since then it has stayed that way. At home she used to hang out at a 24-hour opened café, but since there is no nice place like that where her father lives, she drives arround for hours in her car and makes long walks by the beach. One night, she sees a boy on a bmx making stunts, and soon she finds out this is Eli. Eli used to be a professional bmx rider but he stopped (at lest that is what everybody believed) when his best friend died in an accident he survived. He has always blamed himself for his friend’s death. He also hasn’t really talked to people since than.

I bet you already guessed: Eli starts talking and hanging out with Auden at night, and they become friends. Not long after that they get involved but Auden gets a bit scared by her feelings and backs away from him. But she wants him back and at the end of the book they do, with a little help from Auden’s friends and her mother.

I can tell you the story is much better than this summary, and a must read like all the Sarah Dessen books. I think all her books handle all kinds of hard topics and tell real-life stories in a way you can really relate to. They are page-turners because you want to know what happens next and have just the right amount of romance and suspense to keep you going.

I give this book a thumbs up!

(By the way I was originally planning to post about the Pace Series first, and I haven’t posted about one of them yet, but I will eventually. So stay tuned!)

One thought on “Along for the ride”